Benicio’s dream is a feature-length documentary that takes an intimate look at the lives of three social leaders in the region of Suárez, Northern Cauca, a territory historically traversed by violence associated with the illegal economy and the Colombian armed conflict. In a scenario following the 2016 Peace Agreement with the FARC guerrillas, these three leaders found an unprecedented initiative: an intercultural peace school.

Due to their crucial importance in the life of rural communities, social leaders have become the main focus of violence after the signing of the aforementioned Peace Agreement: as of December 2020, more than 1000 leaders had been killed, Cauca being the region with the highest number of deaths. The film aims to contribute to making this worrying reality visible at national and international level.

However, above all, it is a story of resilience, reconciliation and hope, by narrating the meeting of these leaders and the founding of the “Intercultural Peace School Benicio Flor”, a space for reflection and collective construction. It’s name honours the life of an iconic leader killed in 2015 in his attempt to build a territory in peace. The documentary has, finally, the intention of promoting an international dialogue regarding other ethnic and social conflicts; on a visual level it is a bet to make palpable the commonalities between these communities in conflict, which, ultimately, share a territory and a rural life, whose recognition is being promoted globally. 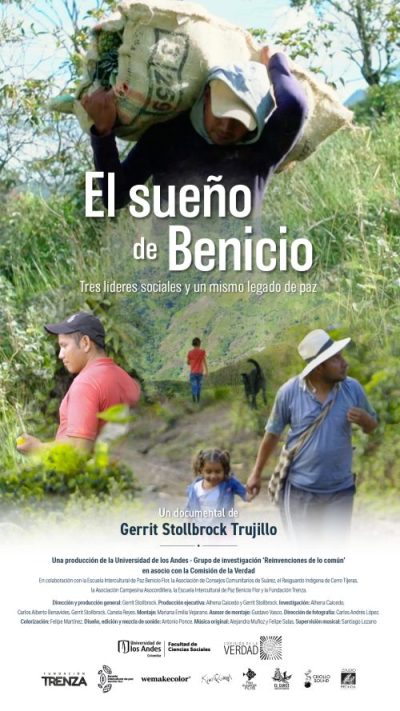 Although their parents were united by common struggles, for decades their communities were separated by ethnic and territorial conflicts. Inspired by the winds of hope blowing through Colombia after the signing of the 2016 Peace Accord with the FARC guerrillas, three social leaders – an Indigenous, an Afro-descendant and a Peasant – embark on an unprecedented peace initiative in one of the most violent rural areas of the country.

As we follow them in the intimacy of their lives, we see at the same time how the national peace scenario cracks and how they are left only at the mercy of the invisible ties that unite them…and of that same dream that inspires them: Benicio’s dream.

Gerrit Stollbrock Trujillo (Bogotá, 1978) began working in film after several years as a consultant on social and peace-building projects for NGOs and international cooperation agencies. He has directed and produced two documentaries, which have participated in film festivals and art exhibitions: ‘La Siberia’ (2015, 86′, co-directed with Ivan Sierra) and ‘Foto Hermi: seals of light’ (2017, 63′). ‘El sueño de Benicio’ is his third feature film and a new project is in production: ‘Tracks of an elusive animal’ (IDARTES grant for filmmakers with trajectory 2021)’. He is teacher of Visual Anthropology at the Universidad Externado de Colombia and Universidad de Los Andes (Bogotá).

The three protagonists are united by a common destiny marked both by violence and by the legacy of an iconic leader of the region: Benicio Flor. The son of another leader who was Benicio’s companion, Juan Pablo Salazar is a young, cheerful, tireless leader who has led an porwerful struggle to organize Peasant families. Eider Flor, Benicio’s son, is an enigmatic Indigenous leader, whose family heritage of leadership has led him to the political and spiritual struggle for the territory. César Cerón, of Afro-Colombian tradition, was Benicio’s political pupil and is an even-tempered, charismatic and familiar leader, who has often played the role of mediator in conflicts between Peasants and Indigenous people. He has twice been a candidate for mayor of Suárez, the last time as the sole candidate of the intercultural process. Although all three have lived through the war from different perspectives, and their respective interests have come into tension on various occasions, the ideals of peace have united their lives in a common purpose.

Through visual and sound connections, through actions that one character initiates and another concludes, through the superimposition of the discourse of one over the actions of the other, Benicio’s Dream is a bid to build, from the intimacy of the three protagonists, the continuities that interweave their lives as rural inhabitants. The camera, always in motion, results in a metaphor of mobile, dynamic and interconnected lives. Likewise, through an audiovisual approach that weaves the voice-over of these leaders with a factual treatment of their daily lives, it generates a dialogue between the past and the present, between family life and political life, as well as between inter-ethnic tensions and the common, while opening us to an unprecedented local look at a historical moment at the national level: the post-agreement scenario and its transformations. Benicio’s dream allows us to get closer to the stories, emotions and dreams of its characters, within an uncertain and hostile national panorama.